Pinspired: My inspiration for these curtains came from Elle Apparel’s Anthropologie Ruffle Shower Curtain tutorial. Here’s {the link} to my pin if anyone would like to pin it.

This shower curtain is so gorgeous, but I had a small problem- none of our bathrooms have actual shower curtains. They have the doors. So I was disappointed to think I had no use for such a cute ruffle project. But who needs a shower? I have windows, and windows have curtains! Problem solved! My Princess is (was) in desperate need of better curtains in her playroom, so that is where I decided to begin.

Rewired: To “rewire” the project, I decided to use vertical ruffles on the curtains rather than horizontal ones. I told you I am taking this seriously. 🙂 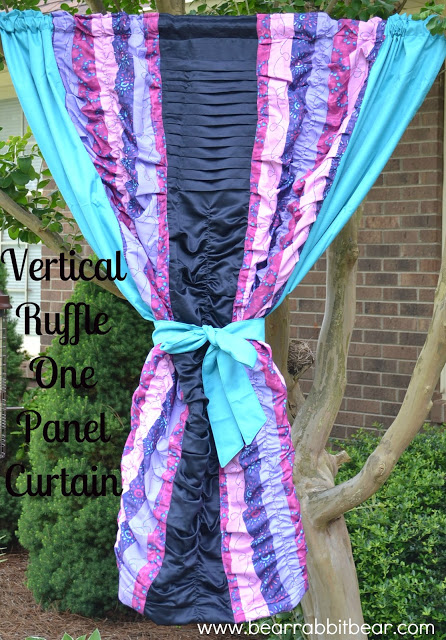 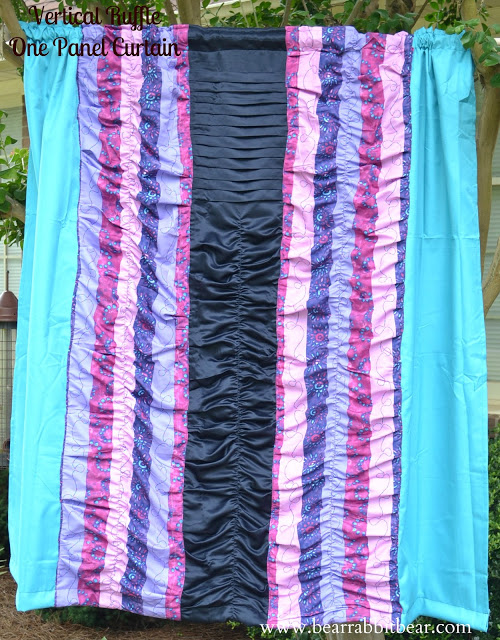 I started with these Eclipse curtains that were already in the playroom. And, let me tell ya, for a craft blogger, they were a bit on the pathetic side. I bought them on sale, and I bought the last two panels, so I used one panel for each window, which didn’t fully cover the window. So to keep the bright sun from shining in through the sides and irritating the Princess while she napped (who wants to nap when the sun is out??), I attempted to tape the sides. Oh, yeah. It’s awesome. I know. Not to mention the curtains are dragging the floor and in the way of all her toys.

The following is the info on how I made the curtains. I measured the window length so that I would know where to cut the curtain off at the bottom. Here are the cuts that I made: 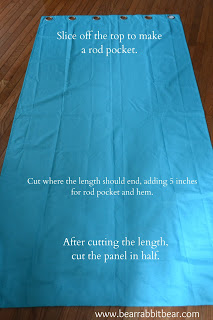 All of the fabric that I used in this project are from curtain panels. Occasionally, Lowe’s Home Improvement will mark wayyy downnn their curtain panels. I purchase them super cheap and save them for projects such as these. Expensive curtain panels = awesome fabric pieces, so remember that the next time you see a curtain panel sale!
I took an extra Eclipse (the steel blue) curtain panel and cut it the same length as the turquoise curtain. I cut the steel blue curtain panel in half also. I will use one of these for each window. 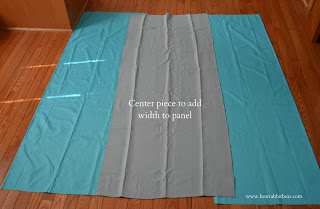 To make the turquoise curtain wider, I took the steel blue piece and sewed it in as an insert. I pinned the right sides together of one turquoise half and sewed with a 1/2 inch seam allowance. I then did the same thing with the other turquoise half. Now I have one large panel. I recommend finished the seams. I have a serger, so I serged the seams for extra support, but you can also zig zag the seams for support. 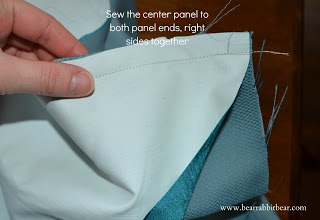 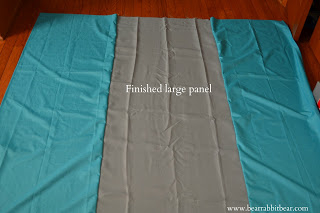 Now the fun (a.k.a. tedious and back-breaking) part. I like the turquoise color in the curtain, so I didn’t want to cover that all the way up, but you definitely could. I choose to do just three vertical ruffles down the middle of the curtain. Here are the cuts for the ruffles:
Here’s a look at the finished fabric cuts laid out on the curtain panel: 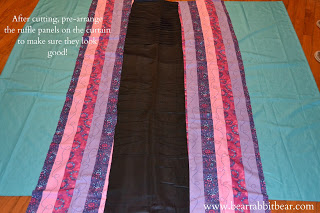 To create the ruffle, sew a long stitch (using the maximum stitch length on your sewing machine) down the center of each ruffle. For more information on gathering fabric, see {This Post}. Taking the center ruffle piece (for me it was the navy strip), pin it to the large panel in the middle. Since the top of mine is pleated, and I didn’t want to ruffle that part, I sewed it in the way that it was. I then used the long stitch to gather the bottom part until it was the same length as the large curtain panel. Pin and stitch in place on both sides of the center ruffle. Do not worry about finishing the ends. They will be covered by the side ruffles. 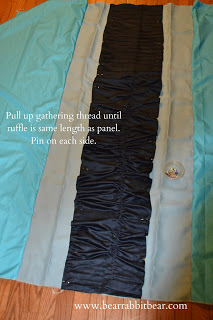 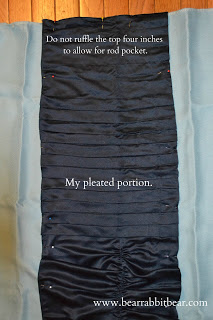 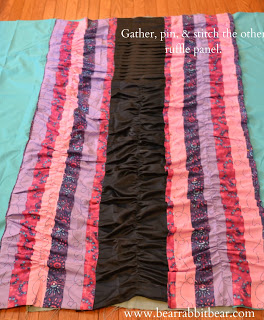 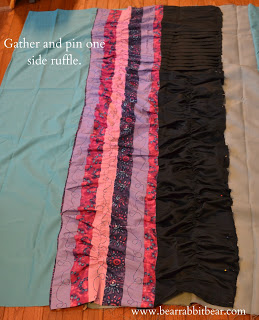 Now that the hard part is over, the rest is a piece of cake! I serged the bottom and top of the curtain panel to join all the layers, but if you do not have a serger, then you’ll have to do the old iron-fold-and-pin method to turn the raw edges.
Bottom hem: Fold under two inches, press, and pin. Stitch close to the turned under (or serged) edge to create a wide hem look. 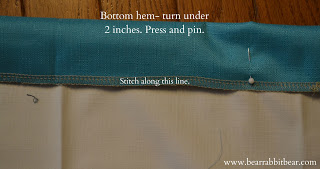 Top Rod Pocket: Fold under three inches, press, and pin. To create a small ruffle at the top, stitch one half inch away from the folded edge. The sew another stitch close to the turned under (or serged) edge to create the rod pocket. 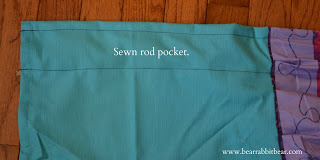 Clip away all the lose threads and you have a Vertical Ruffle One Panel Curtain! 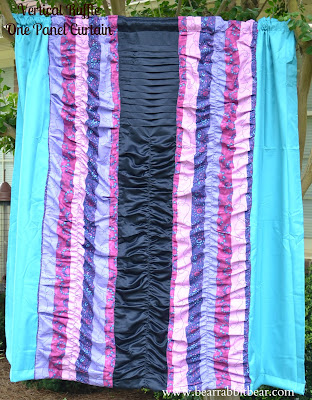 If you’d like to have the option to tie the curtain together to allow some sun to shine in, it’s easy to create a simple tie-back. For each tie-back, cut two strips of fabric that are 42″ by 3″. Right sides together, sew the short ends together to create one long strip of fabric. Fold the piece right sides together and stitch with a 1/2 seam allowance, leaving a 3 inch opening on the side for turning. (I also wanted to make mine with pointed ends. To do this, I cut the ends at an angle before sewing). 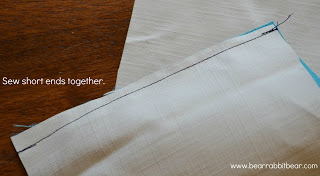 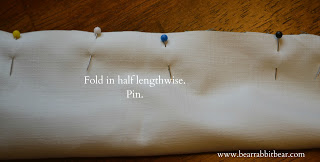 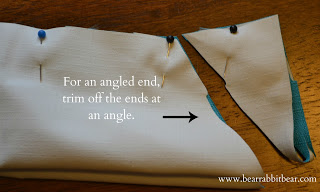 Turn the strip right side out and press. Pin the opening closed. Topstitch all the way around the strip to add a polished look to the tie-back and to close the opening. 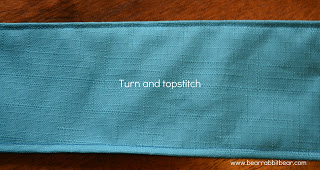 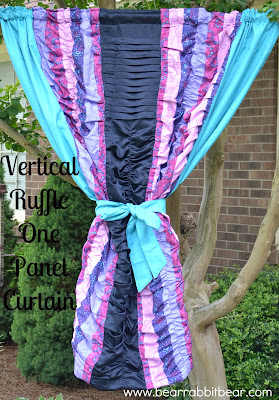 So much work, but totally worth it! I finished these up at night and hung them in the playroom for Princess to see when she woke up the next morning. She was so excited and surprised! And, no, I do not keep my curtains in a tree- I just wanted to pick the colors up in natural light. 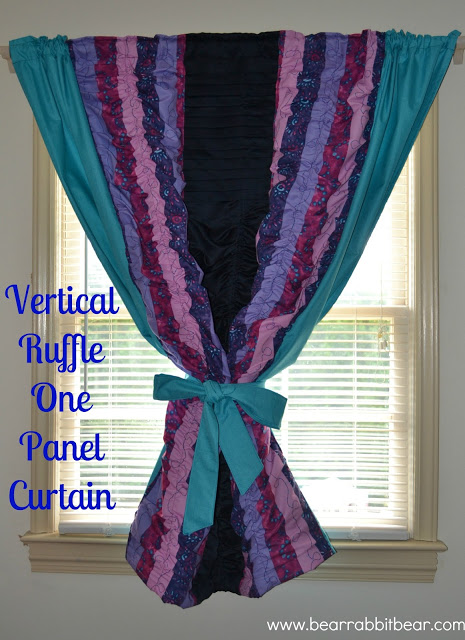 I made two of these- one for each window!

Linking to these parties!
Before and After Series
How to Use A Rafflecopter Entry Form for Give-aways: The Entrant’s Guide

Let's customize mom a Mother's Day mug! Whether your favorite mom is a people … END_OF_DOCUMENT_TOKEN_TO_BE_REPLACED 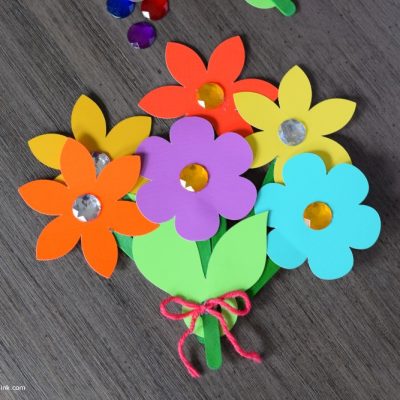 Let's get crafting for Mother's Day! Make a flower bouquet for mom that she … END_OF_DOCUMENT_TOKEN_TO_BE_REPLACED