If you follow along on Facebook, then you may have caught on that Jason and I have been doing Whole30 the past month. We still have a few days left, and I can honestly say that the month has flown by quickly. But this post isn’t an explanation of the Whole30 plan or recap of our month (I’ll save that for next week!). It’s a discussion of what I thought would be the most challenging aspect of my 30 days: Quitting Soda. 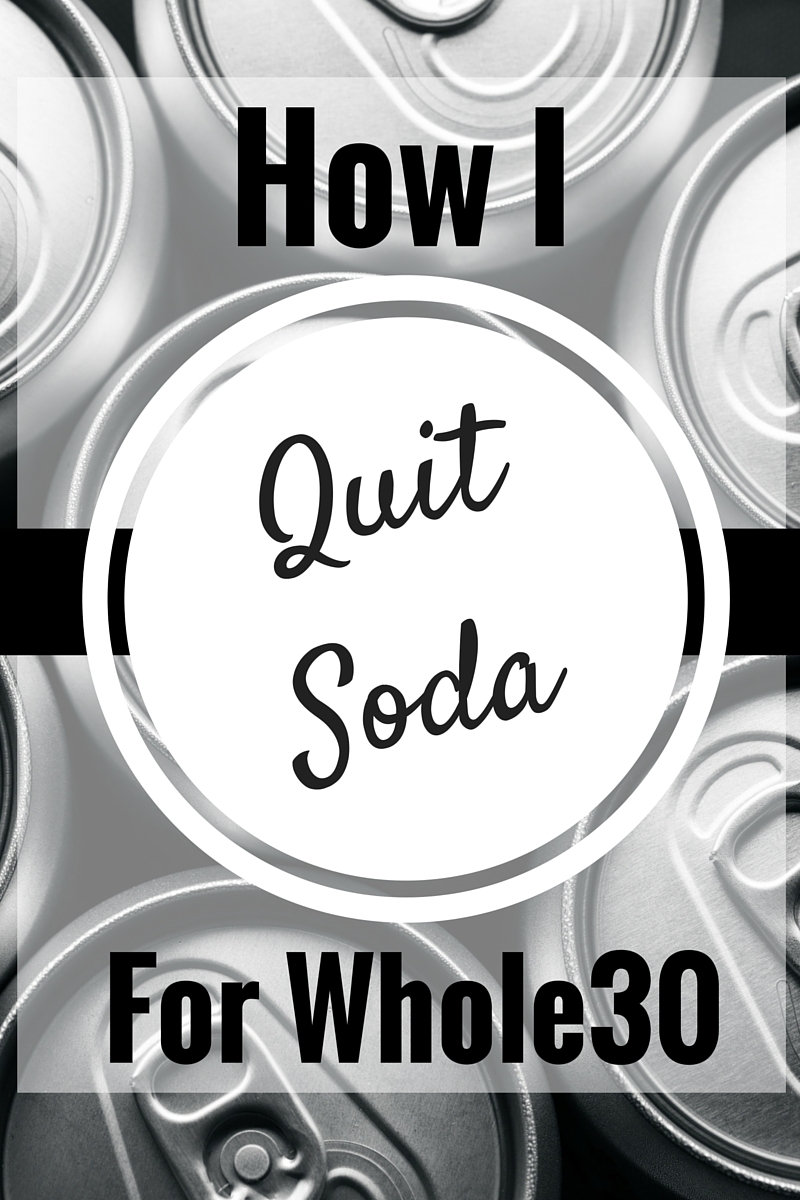 Last year, I posed a question to my readers on Facebook:

“Do you have any advice on kicking the soda habit?”

I received several well meaning answers. One person stated, “Just don’t buy it.” Others tried to figure out what I liked about soda and how that could be replaced by something else. But what no one realized, what I failed to admit, was that soda wasn’t simply a beverage I consumed with a meal; it was an addiction.

Let me break it down for ya’. I’m a triplet mom. My husband works two jobs outside the home. I work one from home. I have a child who is in remission from cancer and one who undergoes therapy sessions each week. Our life is awesome, but it’s stressful (I know many of you can relate!). Most days I cannot get my work completed until the kids go to bed, which means very long days. Soda was a treat, a comfort, for me. I liked the taste. I lived for the caffeine to get me through the next portion of my day. The sound of a can cracking open was like music.

I knew that quitting soda for Whole30 would be the hardest part of the plan for me. But it was also part of the reason that I was doing the plan. I didn’t want soda to control me, my moods, my headaches, and my day any longer.

My husband and I had a Whole30 “go live” date of April 11. I had two choices: quitting soda cold turkey or weaning. Jason can quit anything cold turkey. He’s just awesome like that. Unfortunately, I’m not. So I decided to wean.

I’m sharing how I weaned from soda to hopefully help anyone in a similar situation. It’s not a guarantee of anything and should not take the place of any medical advice. This is just what worked for me!

Two weeks before we began Whole30, I began pushing back the time that I would allow myself to have a soda. I would push back the time by an hour each day.

I still had a few headaches, but they were not nearly as severe as the times that I have tried to quit soda cold turkey. This weaning method also kept me from being a grouchy pants for the weaning period! By the time we started our Whole30, I was completely off of soda and have been since!

What have I been drinking on Whole30? Each morning, I make a pitcher of lemon and lime infused water. I drink that throughout the day, and I often have to make another one around dinner time. The kids like the lemon infused water, too. I’ve also been drinking a sparkling water that is considered Whole30 approved.

I won’t lie and say that I haven’t craved soda. It’s probably been the only true craving that I have had on the program. But I do feel free from the soda addiction, and if I ever do have one again, it will be with a informed mind that is aware of the consequences. However, I’ve enjoyed the non-bloating that comes with being off soda, so I’m hoping to keep it that way!

Have you quit drinking soda? Did you quit cold turkey or by weaning?

Do you enjoy crafting Christmas ornaments? We do at our house! Here's how to … END_OF_DOCUMENT_TOKEN_TO_BE_REPLACED

Have you noticed how popular a Christmas Simmer Pot is on social media? I'm not … END_OF_DOCUMENT_TOKEN_TO_BE_REPLACED

Jingle bells are fun for Christmas crafts! We like to use them for ornaments, … END_OF_DOCUMENT_TOKEN_TO_BE_REPLACED