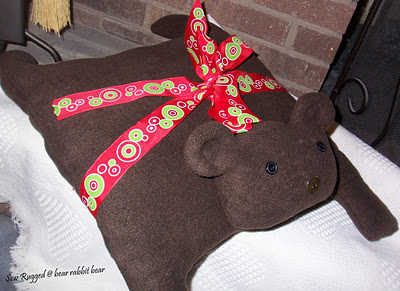 In case you missed my guest post over at Sugar Bee Crafts last week, here’s a super easy cute bear gift you can make in no time! For those of you not shopping this weekend, maybe you’ll want to whip one of these up!

My favorite thing in the world is when I can make a gift for someone else to enjoy. It’s slightly addictive! So how about making a personalized Brown Bear, Brown Bear Pillow for the little one in your life?

1 yard of fabric– I recommend Sherpa, Faux Fur, or Fleece. Joann’s had a ton of fleece remnants left over from their big fleece sale, so I used fleece. Alternate idea: Use one color fabric for the top, and a cute plaid fabric or other color for the underside of the bear.


Fiberfill Stuffing- at least a bag and a half

Embroidery Floss for eyes/nose OR Buttons

Paper to make your pattern

Begin by cutting out your pattern. The finished pillow should be an 18″ square.

Using a large piece of paper, draw a square that is 19″ on all four sides. This allows for the 18″ square pillow and a 1/2″ seam allowance on each side.

Draw feet on each corner of the square. Or you can cheat like me! I drew out the feet and then taped them onto the body.This helped me get four uniform feet since I’m not so hot at drawing. Cut out the body pattern. 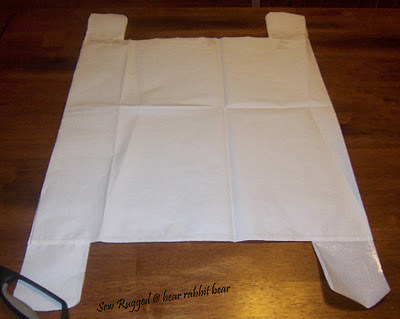 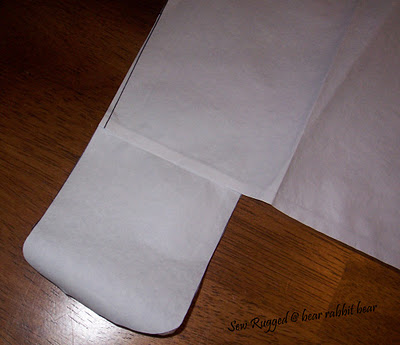 Take another piece of paper and draw a large circle or oval- whatever you want your face shape to be. Be sure to add ears on each side. Cut out the face pattern.

Find the center of the face. Draw a dot as a pattern marking for the nose. Draw two more dots as a pattern markings for the eyes. Use a ruler if you need to measure to make sure the eyes having the correct spacing. You can see in my picture where I was off on one eye, so I marked it out with the “X” and drew another eye. 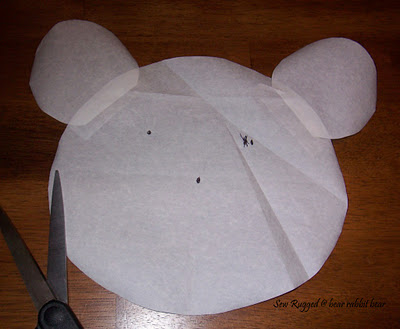 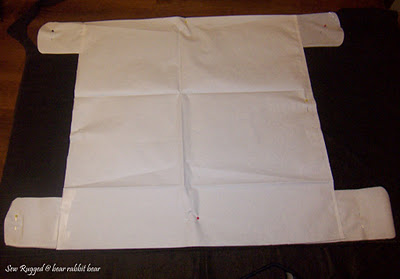 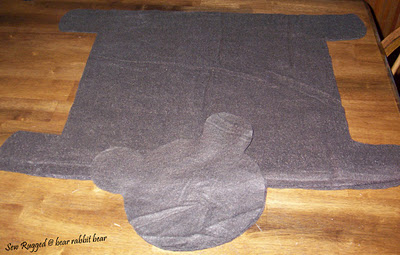 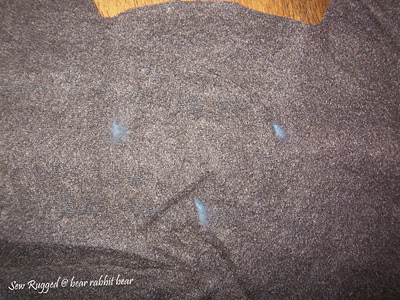 Finish the eyes and nose. You may do this one of two ways.

Option One: If you are making this gift for a small child or toddler who still puts objects in their mouths, I would embroider the eyes and nose. However, I tried this and it was a total flop! My embroidery skills are more than rusty, and I don’t have an embroidery machine. My pillow is not for a infant, anyway, so I chose option two. 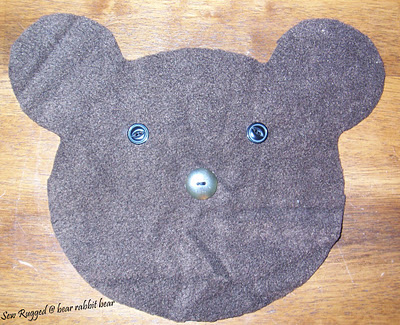 Personalize your bear! I didn’t get to do this step because I’m not sure who I’m gifting my Fleecy Bear to yet. If my daughter spots it, the bear won’t make it out of the house. He’ll be added to her “buddy collection”. But if you are making yours for a particular someone, take this time to embroider or cross-stitch the child’s name somewhere on the side or end of the bear- anywhere you want! After all, one of the advantages to making homemade gifts is the ability to personalize!

Place the two face pieces right sides together and pin. 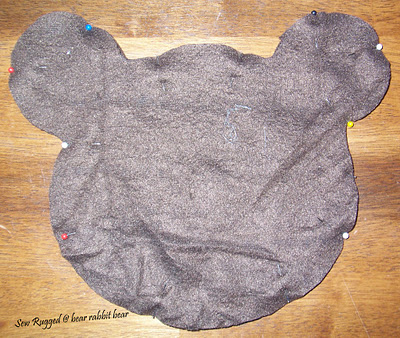 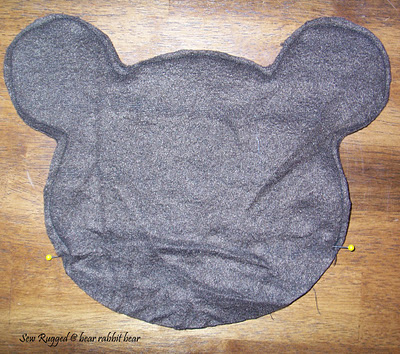 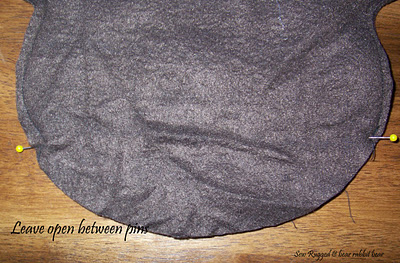 Clip the corners and curves around the edge. This will allow the curved seams to lay flatter when turning.

Turn the face inside out. I then wanted to add an extra dimension to the ears. Using a piece of fabric chalk, I drew a semi-circle on each ear. I just free-handed them and tried to make them match. I left enough room around each semi-circle to place a small amount of stuffing in each ear. 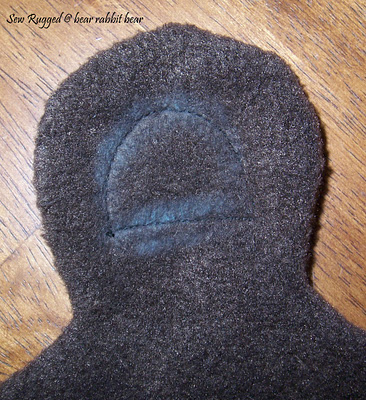 I then ran a stitch around each semi-circle. Use a damp cloth to remove the tailor’s chalk.

Attach the head to the bear body. I felt like the sewing machine would secure the head to the body better than I could by hand, so I made sure to make this possible by attaching the head before sewing up the body and stuffing. Read this part carefully and refer to the pictures for visual explanation.

Take one piece of the body fabric and chose the end that you want to be the face. Place the head right side up. Find the middle of the length (in between the feet). Measure up about an inch. Mark this spot.

Now take your bear head piece. Make sure that the eyes/nose are facing up. Take the topmost portion of the head (you’re working with the part of the head that you left open in step five) and fold it up. Pin it to the rest of the head  get it out of the way. From the bottom of the head, measure about one inch up in the center. Keeping your finger on this spot, pin the head to the “mark” that you made on the body piece. 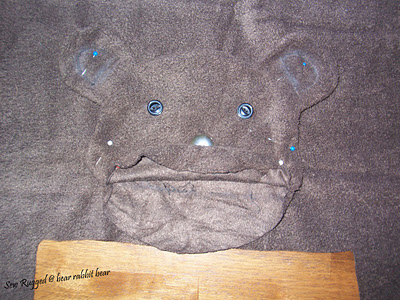 Pin around the head so that it is immobile on the body piece. Make sure that the head piece is remaining open. See the above picture.

Now, draw a large semi-circle on the inside of the head. You should be drawing on the inside portion of the head fleece piece- the part that will be covered once you stuff the head. (Ignore my black threads that somehow found their way into the picture). It doesn’t have to be perfect- just try to make it as even and as large as you can. 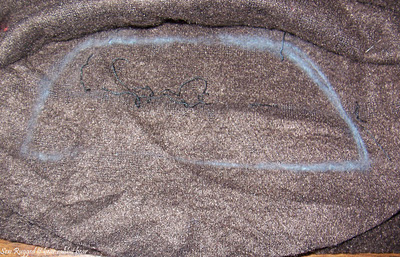 Stitch around this semi-circle. To reinforce this stitch, run another seam on the inside of the semi-circle. 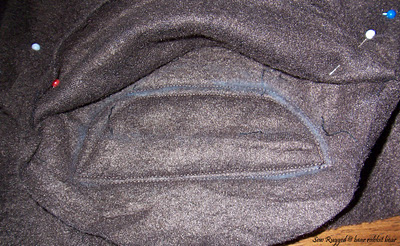 I know this part is a little confusing- hopefully, the pictures help. To try to sum it up, in this step you should have attached the head to the outside of the body. The seam you used to attach the head should be on the inside of the face portion. The seam should not be less then one inch from the edge of the body piece (This is to make sure you have enough room for the seam that attaches the two body pieces).

Now we need to sew up the rest of the Fleecy Bear pillow. Before you do this, make sure that you fold up all of the loose head portion and pin it out of the way with a large pin (poor bear!!). 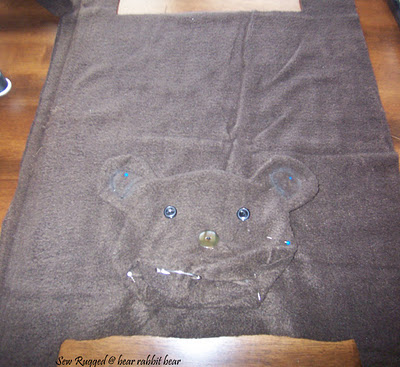 Place fleece body pieces right sides together and pin. Using a 1/2″ seam allowance, sew the body pieces together. Leave at least a four inch area open on the side for turning. 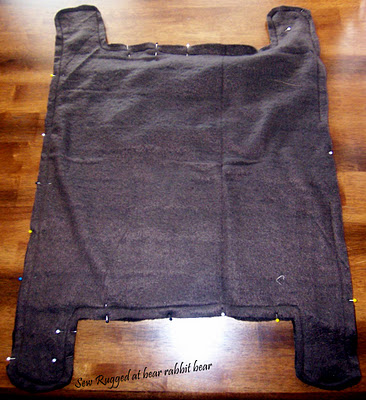 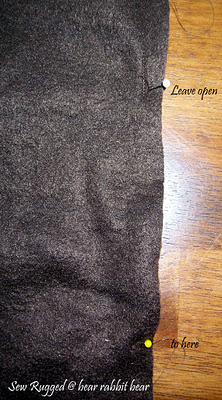 After sewing a straight stitch around the body, I also reinforced it by stitching a zigzag seam close to the straight stitch. Call me paranoid, but I wanted to make sure the seam would stand up to the rough and tumble action of a kiddo.

Clip the corners and curves. Clip off any excess fabric trim.

Turn bear body inside out. Use a dowel rod to make sure the feet are completely turned out. Remove the pins from the head. 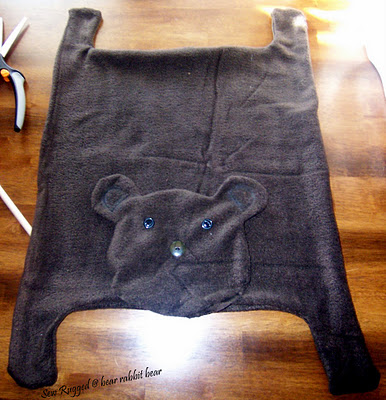 Stuff the bear body, stuffing the feet first and then the remainder of the body until the body is full but not lumpy. It helps if you fluff and separate the fiberfill before inserting it into the bear. Slipstitch the body opening closed. If you are unfamiliar with slip stitching, you can watch a video {Here}.

Stuff the bear’s head. Push stuffing into the ears with a dowel rod. Slip stitch the opening closed. If you think that the head is still too “floppy”, tack on a few stitches around the head to secure it in place (this will depend on how well and how far up you were able to secure the head in step 6). 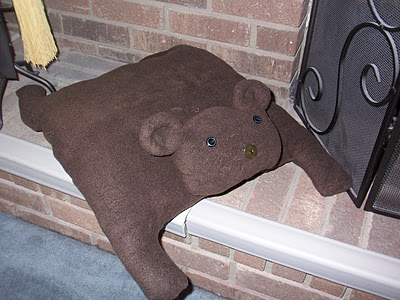 Tie a bow around him, or pair him with a copy of “Brown Bear, Brown Bear, What Do You See?” for a cute gift!

While the instructions may be a bit lengthy, I promise it’s super easy. I made the pattern and cut out the pattern pieces in one night after my daughter went to bed. I then finished the bear the next day during her nap time. I hope you get a chance to try this out for a holiday gift! I’d love to see pictures and/or hear from you if you do!!

And, by the way, as evidence by the completed pictures, my daughter did find Fleecy Bear and has claimed him for her own. So beware if you’re trying to make these as gifts for other kids in your family- they may not make it out of the house! 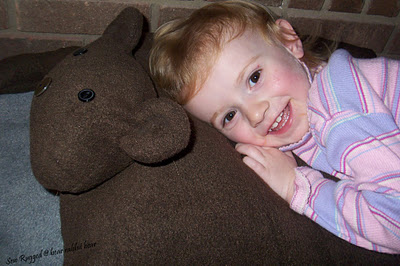 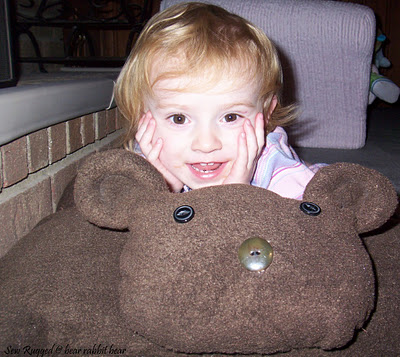 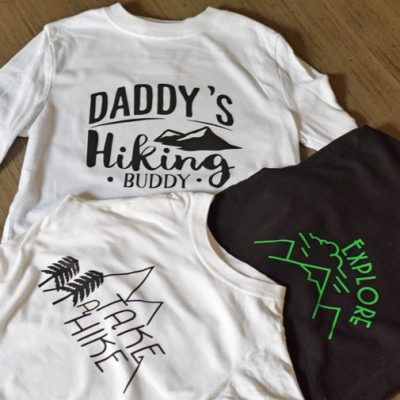 Did you recently purchase a Cricut Maker 3? Here's a fun (and easy!) project to … END_OF_DOCUMENT_TOKEN_TO_BE_REPLACED

Intimidated by making homemade ice cream? I've always been! That is, until … END_OF_DOCUMENT_TOKEN_TO_BE_REPLACED

This Munchy Paper Bag craft from Dog Man: Grime and Punishment is a fun project … END_OF_DOCUMENT_TOKEN_TO_BE_REPLACED